Using technology from its high-end mixing consoles, this desktop mixer has impeccable audio quality that can give you that “broadcast audio” sound

Have you ever wondered why orchestras don’t just use samplers these days? You could argue that if the performers ditched their conventional acoustic instruments for samplers the world would be a better place, with perfectly reproduced sounds giving a uniformity of excellence to any composer’s work.
If you’re feeling a little queasy about that opening paragraph, you’re not alone, and it’s easy to see why: traditional instruments have an infinity of subtle characteristics and the interplay between a musician and horn, cello or oboe is what makes a great performance. Samplers are clinical and sterile in comparison.
I don’t mean this to imply that all digital is bad. Digital recordings can capture amazing depth and expressiveness if they’re made at a suitably high resolution and with very good analogue to digital converters. But there are times when most people would agree that analogue is best, and foremost amongst those is when you’re making a recording.
Digital processing is amazing. Easily affordable software can emulate an entire studio on a laptop. But while digital audio recording and reproduction has reached levels of quality that are almost beyond criticism, there are good reasons for keeping processes like EQ and compression in the analogue domain. Digital audio processing can be very good, but well designed analogue circuitry – especially at the delicate front-end of a recording system – can work wonders.
SSL’s diminutive but powerful SiX mixer is the physical embodiment of this philosophy in an affordable package. 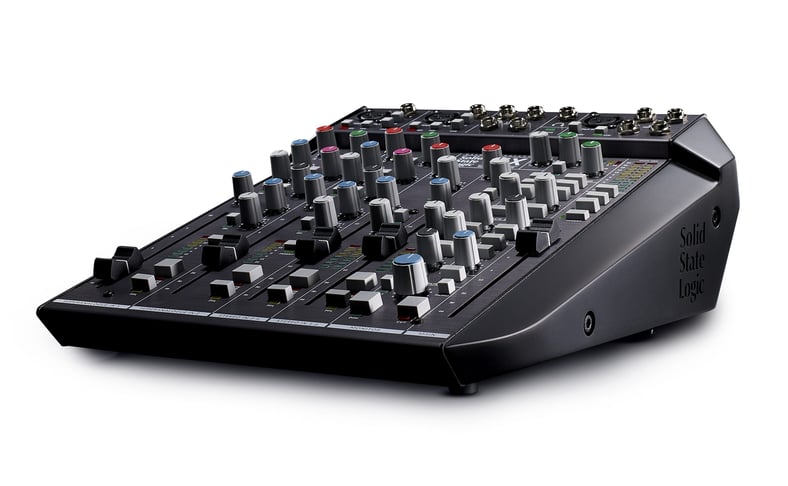 The desk itself is both handsome and functional. It has an unmistakable family resemblance to every other SSL desk. It’s a purposeful wedge shape, with most of the inputs at the top. With most mixing desks, the complexity is easy to cope with because essentially every channel has the same controls. If you know one channel, you know them all.
It’s not quite like that with the SiX, but the logical layout – with colour coded knobs for compression, eq, etc, means that even if you do get lost, it’s easy to find your way back.
The first two channels are mono, with SSL SuperAnalogue Mic pre amps. These have way more gain than you would normally see on a desk of this size and sound incredibly clean. There’s also a high pass filter to cut out air conditioning and passing tube trains.
Compressors aren’t particularly intuitive things, but the SiX fixes two of the common parameters to leave a single control knob. This might sound restrictive but it actually brings a quality result closer by only allowing settings that make sense and which sound good. It’s very intuitive and very quick to get a good result.
There are two stereo channels, bringing the total number of main inputs up to six.
The faders are smooth 100mm components with the extra length allowing for more precise adjustments. They feel very “pro”.
There’s a comprehensive monitoring section that makes sure you’ll be able to use the SiX in almost any context. (I won’t go into detail here, but it’s fair to say that you’re very unlikely to run out of options).
Finally, the main output bus has a classic G Series Bus Compressor from SSL’s larger consoles, and it means that you can apply subtle compression to entire mixes.
The SiX is a compact mixing desk with that promises the sonic performance of a full scale, full price recording console. But it’s not really meant for a recording studio (although it certainly does have its uses – check out the video below). Instead, it’s meant to provide an extremely high quality analogue signal path for small-scale recordings like voice overs and podcasts. The idea is to use the onboard microphone pre-amps, compressors and EQ to get the sound into the best possible shape before digital recording. And these are genuine SSL compressors, identical in performance to those found in SSL’s high end consoles.
It’s important to clarify something here. The SiX is analogue only. There are no digital outputs. There’s a good reason for this. For the desk to have digital outputs (so you could connect it to, say, a computer), it would need analogue to digital converters, and in order to match the quality of the desk, these would have to be high end and expensive. The SiX can be used with any converters, but it’s completely understandable for SSL to want to leave that choice to the customer, because every A/D converter has its own signature, and if the desk had A/D built in, that would have “frozen” or “crystallised” some aspects of its character and – ultimately – limited its versatility. This is definitely a case of “less is more”. I think the point about the SiX is that analogue sonic performance like this is unheard of at this price. To be honest, it will make any computer audio interface sound better – and if you have a really good one, the combination will sound superb. 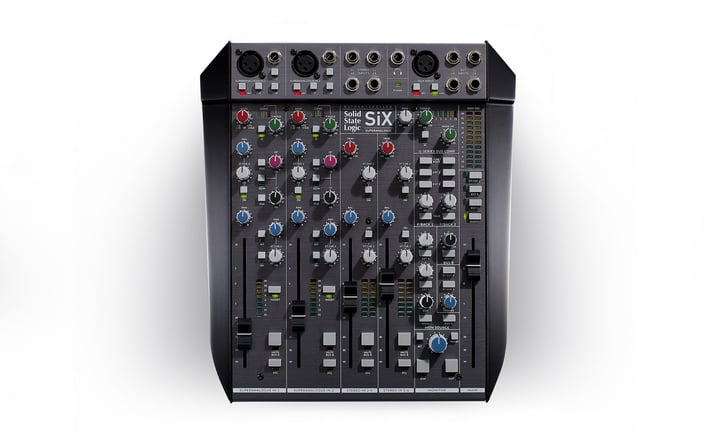 It’s important to say very clearly that it’s worth having this mixer even if you have nothing to mix. I know that sounds unusual but the point is that this device is all about sound quality, and it doesn’t matter whether you’re using one channel or six. In fact, many users will probably think of it almost as an “effect”. Here’s why.
It’s well known that in the video industry, sound is sometimes an afterthought. That might actually be an understatement, because with the notable exception of high-end dubbing theatres, audio almost always takes second (or fifth) place after other technical considerations.
That’s completely understandable because from our own research, a significant proportion of video makers describe their job as “I do it all” – all the way from feeding the company cat, to editing, colour grading and – somewhere in amongst all that – being responsible for sound.
So it’s probably fair to say that video makers tend not to be deeply trained in the fine art of audio production, and, understandably, spend a lot of time watching levels and making sure their audio, captured on location, is intelligible.
But what about voice-overs? And what about the increasingly popular format of podcasts-with-video?
It doesn’t take long to find that it’s really quite difficult to record voices with that rich, inviting, professional sound that you get on the radio.
Obviously you need a good microphone. It’s also essential to have really good acoustics in the room. But even that will leave you with a missing ingredient, which is that you need compression – and not just any compression.
That really is the thing about this desk. It has some of the best compression I’ve ever heard in equipment that you could even tenuously describe as affordable. Almost without exception, everything I’ve put into the SiX comes out sounding better, where “better” means punchier, smoother, deeper and more engaging. I’ve tried it with microphones and even analogue synthesisers. It’s unmistakable. 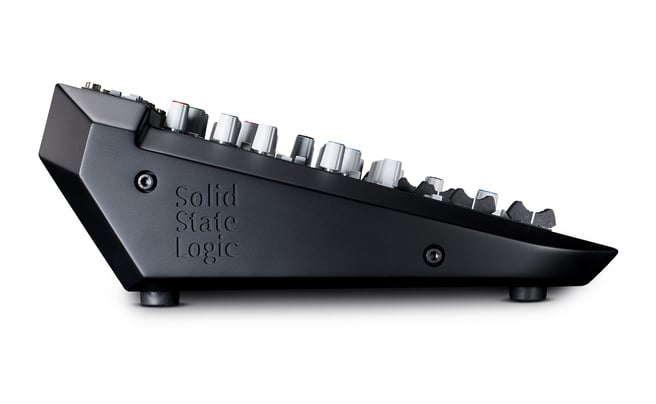 Don’t get me wrong: you can’t “fix” bad recordings with SiX (except perhaps with the very smooth EQ). But you can make good recordings better. I’m pretty sure that if you did an A/B comparison, the version that’s been through this desk would win most of the time.
How is this even possible? I suspect it’s because the audio path through the SiX is so outstanding that it gives space for the compression to work. The compressors in question have quality and punchiness in their DNA.
This is one of those things that you really have to try, and I suspect that if one of these finds its way into your audio set-up, you’re never going to want to be without it.
And at US $1499, it’s an absolute bargain.


Tags: Audio
Written by David Shapton
Advertisement
Advertisement
Advertisement
RedShark is a multiplatform online publication for anyone with an interest in moving image technology and craft. With over 50 contributors worldwide, full-time developers, editorial, sales and marketing staff, it is the go-to site for informed opinion and know-how for the quickly changing video, film and content creation industries.
RedShark 2020 @ All rights reserved.