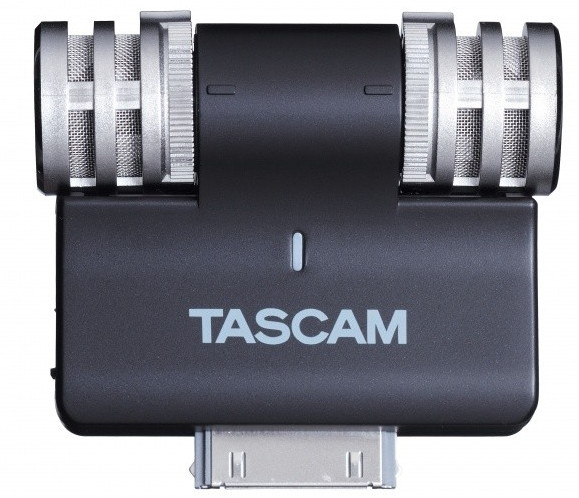 Tascam iM2
I recently used the Tascam iM2 in one of our live sessions with The Vespers. The lightweight, plastic recording device plugged directly into the bottom port of my iPhone 4. For a relatively inexpensive recording device, I have to say I was impressed with the Tascam iM2.
The Tascam iM2 is equipped with two small condenser microphones, which have a cardioid polar response pattern, allowing for directional stereo recording. In addition, the microphones can be rotated 180 degrees, giving the user flexibility in his or her direction of recording the sound source.
There is no denying that the iM2’s recording quality surpasses that of the iPhone or iPad. It captures audio in 16-bit, 44.1 kHz .wav format and can record levels up to 125 dB SPL without distorting.
The iM2 contains a few additional features to aid in recording, as well. A level control knob allows the user to change the gain on the device. To avoid distortion when recording loud levels, the iM2 features a limiter, which can be switched on or off. The device also contains a mini USB socket for uploading audio straight to one’s computer.
Although the iM2 will work with any recording app on the iPhone or iPad, Tascam recommends using the Tascam PCM Recorder app. This app features additional options to improve the recording experience. It allows the user to swap the left and right channels of audio. A low-pass filter option helps to eliminate high frequency device noise. The app also includes a simplified equalizer control that allows users to adjust high and low EQ. Lastly, users can change the recording level and activate the limiter with the app.
There are a few improvements Tascam could bring to the iM2. For example, playback is impossible when the device is plugged in, making any sort of overdub impossible. In addition, while the Tascam PCM Recorder app allows users to upload their recordings directly to Soundcloud, it does not feature any other options to transfer recordings to the computer.
All in all, the iM2 is a solid choice for anyone who wants higher quality stereo recordings from their iPhone or iPad. While the quality is higher, by no means does it match up to standard condenser microphones used in professional recording. But if you want a good, inexpensive, on-the-go recorder, the iM2 is the device for you.
The Tascam iM2 is compatible with the iPhone 4S, iPhone 4, iPod touch (4th generation), iPad, and iPad 2. 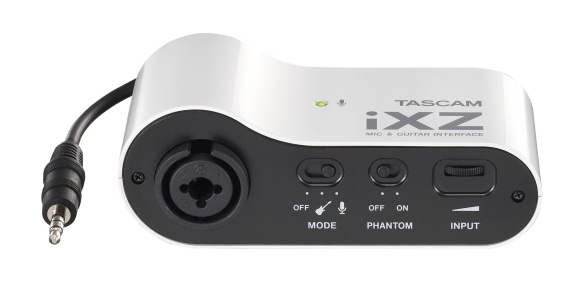 Tascam iXZ
The Tascam iXZ is a simple microphone and guitar interface for the iPhone, iPad, and iPod touch. The device is plugged into the headphone jack and set externally on a level surface. With both a ¼” jack and an XLR jack, users can directly insert cables to record their instruments or microphones.
A mic/line switch designates input levels on the device. The iXZ also has phantom power (powered by two AA batteries), which is necessary for many condenser microphones. The phantom power can be turned off and on, allowing users to save battery life when recording line level signals. An input level control knob lets users designate the amount of gain to place on incoming signals.
Like the Tascam iM2, the iXZ makes overdubs a difficult task. This is because the headphone output on the device mixes the output signal directly with the microphone signal, lacking any control of playback levels.
Overall, the Tascam iXZ is a well-made, affordable recording device, suited for quick worktapes or demos. Naturally, its mic preamp lacks the quality of an Mbox or a Firebox, but still triumphs over that of the iPhone or iPad. The Tascam iXZ is a great purchase for those interested in a portable interface that can record high quality audio quickly and easily to their iPhone, iPad, or iPod touch.
See more
Only members can comment. Become a member. Already a member? Log In.
June 26, 2022, 8:17 pm
June 1, 2022, 8:13 pm
May 15, 2022, 10:46 am
May 14, 2022, 10:15 am
May 7, 2022, 9:47 am
April 19, 2022, 9:23 am
April 23, 2012, 10:41 am
February 10, 2011, 11:44 am
September 16, 2010, 12:01 pm
January 19, 2010, 4:59 pm
September 1, 2008, 5:38 pm
August 25, 2022, 11:03 pm
For the latest songwriting tips, reviews, podcasts, and more.
© 2022 American Songwriter